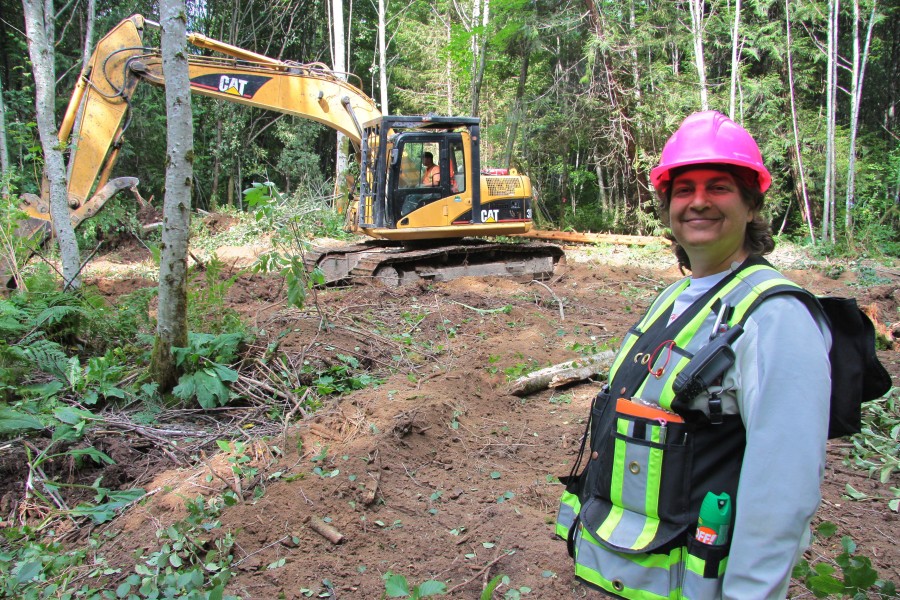 Coming across an article written on Edith Tobe‘s project in the Squamish Chief, I felt that there really should be a bog blog entry on it too. Afterall, this is a massive project that I’ve been lucky enough to witness. A participant of the 2010 Wetlands Institute in Kamloops, Edith and the Squamish River Watershed Society have taken wetland construction to their community passionately and whole-heartedly.

In the late spring of 2011, Edith took two volunteers and myself on a tour through sites flagged for restoration work. Her main goal was to create better habitat for Red-legged Frogs (a blue listed species) in the area who are constantly being encroached upon by increasing development, highways and off-trail recreation. Some of the sites were within the Brohm Lake interpretive forest, where depressions on the ground, plenty of skunk cabbage and a nearby creek signaled that water might be held in pools given a little excavation. Other sites included an old highway, now defunct, where liner wetlands could be created alongside a creek. We did in fact see a few Red-legged frogs in pools along the creek while we were there. As we walked along the path to this site we were graced by the brief appearance of what looked like a Barred owl, and Edith noted how the treed corridor was great bat habitat. This site was golden!

Edith had the graces of Thomas Biebighauser‘s presence in the spring to help identify sites (more than 10!), and then again this summer to assist for a week in the initial phases of construction. He is a seasoned expert in wetland construction, having built over 1000 wetlands in North America. With this amount of support, along with a well-organized plan, Edith was set up for success with her project.

After returning from another wetland construction project in Logan Lake this past August, myself and my intern, Graham, stopped by to visit Edith and take a look at the progress she’d made. We were impressed and truely inspired by what was done in such a short period of time. To see photographs taken during that visit, visit our Flickr albums!

Some of the sites selected by Edith & Thomas Biebighauser will be restored during our BCWF WEP Sea-to-sky Wetland Restoration Workshop slated for 2012. Stay tuned…

2 thoughts on “A wetland wonderland in Squamish”