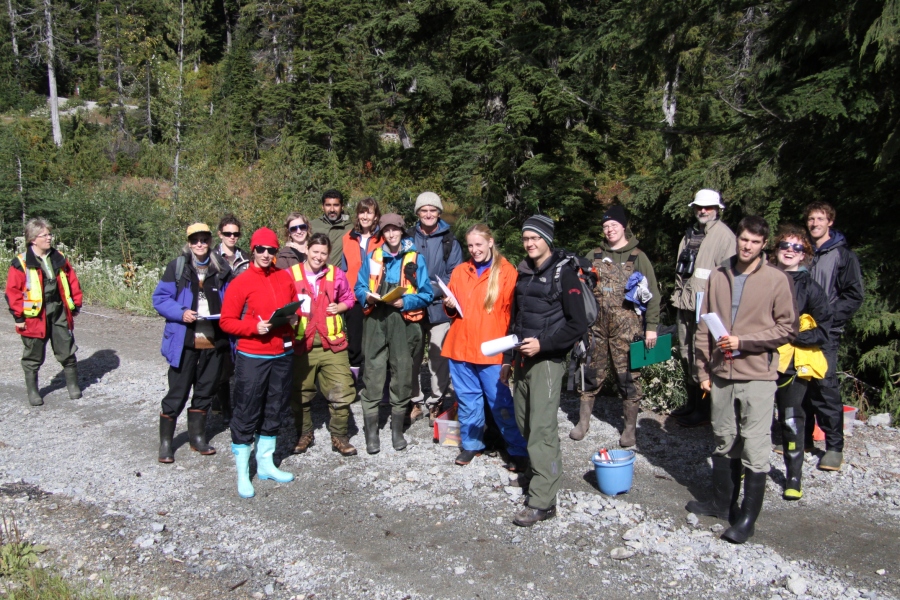 The Wetlandkeepers workshop at Cypress Bowl near West Vancouver was an opportunity to acquire skills in identifying wetland types, to learn how to map wetlands and identify plant species within them as well as to understand the problem of soil erosion and techniques in preventing it from negatively impacting local waterways.

On the first night we met with a professional Biologist, Michele Jones of Mimulus Biological Consultants, and discussed the important benefits of wetlands and how to identify various types through soil and plant identification. Then, by looking at a map of Burnaby, an urban environment, we were given an understanding of the multiple impacts that could stress a local ecosystem such as Burnaby Lake. We learned about how watersheds capture and carry all kinds of waste materials into streams and lakes through both run-off and groundwater flow. The material covered on Friday night prepared us for day two where we strapped on our hip waders and gum boots to apply our new found knowledge. We set ourselves to the task of mapping a wetland adjacent to the Cypress ski lodge, a 2010 Olympic venue.

In order to map the wetland, we first traced out features onto mylar from a satellite image. Although the image had strong shadows, we were able to make out a stream and differences in vegetation types, which we later tried to verify in the field. As a group, we toured the perimeter of the wetland,noticing different varieties of grasses and sedges and the inflows and outflows of water. There were a number of sources of water entering the wetland: numerous culverts and small streams ran down from the mountain slopes. There was also a main channel which came from further up Cypress Mountain. This exercise made us aware of the appearance of seepage (ground water to surface water flow) and ephemeral streams that only occasionally run.

During this time we also made a plan on how to lay out our transects. We made a baseline that ran along a path on the south side of the wetland. Four groups spaced themselves an equal distance apart and set their compass to the same bearing to create transects through the wetland. Each group traversed their transects and delineated different zones with flags. Zones were identified by noticeable differences in vegetation type or edges of watercourses. Once the zones were marked, we then walked back along our transects to create quadrats, (a square meter sample of each zone where we recorded the percentage and types of plants within the zone). By the end of day two we had each successfully mapped our transects of the wetland with the hopes that the information could be used in the future as part of a further conservation effort within the area. The maps will be given to the Friends of Cypress Bowl, North Shore Wetland Partners and Cypress Mountain Ski Resort for future planning.

The wetland was really rad! We found many alpine species that we don’t normally get a chance to see at lower elevations: various Blueberries, Copperbush, a native Azalea…these are only a few examples. Learning to key out plants by looking through plant books that were provided by Michele, BCWF and some keen participants enriched our understanding of the space that is so often and so easily overlooked. On the third and final day of the course, we had two other guest instructors (Ed Van Osch & Sylvia Letay) come in to discuss other aspects of the wetland that were concerning us.

The first, Ed Van Osch, a specialist of soil erosion, gave a presentation on the different types of erosion. We also learned to calculate slope to determine at what point a space, such as our wetland, might become loaded with sediment. In order to determine the slope around our wetland where snow and debris from the parking lot and ski hill might become a problem, we were taught to use a clinometer. There was a demonstration on how to do a simple field check of the sediment level in water and to determine

what type of materials (clay, silt, sand, organics) were in the sediment. Different types of sediment control were shown to the group as options for the Cypress wetland and future projects of the group participants. After these demonstrations and exercises Ed toured the wetland with us for a second time, making note of where sediment would spill into the water and where improvements of sediment control could be made.

The second guest, Sylvia Letay from the Ministry for the Environment, brought the group back into the classroom for a question period about how to apply to the government to have in order to work around water and rehabilitate wetlands. The difficulties of working within government regulations were apparent, although the group was given the necessary tools to wade through these applications.

The success of this Wetlandkeepers course was in the great amount of information imparted about different aspect of wetland protection and monitoring and also in the outcome of the groups’ assessment. As a result of the course, Cypress Mountain Ski Resort has decided to create a formal sediment and erosion control plan that will reduce disturbances to the wetland and Cypress Creek. To create this plan Ed Van Osch will return in the spring to work will work with Cypress staff.

This workshop was generously funded by: