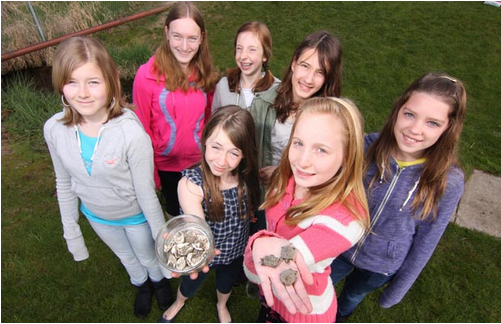 Past participant of the Wetlands Institute in Kamloops (2010), Science teacher and school Eco Club leader at KLO Middle School,  Michele Hamilton, has made progress with her stewardship project.  She has recently been featured in an article in The Province on the challenge of creating a healthier wetland habitat on school grounds, with the support of students, parent advisory committee, school board and school district committee. She has successfully inspired those around her and has now received financial support to get her project in motion. As a result of her work with the Eco Club, the school has received the Mayor’s Environmental Award. They are currently working on naturalizing Fascieux creek on their school grounds while they wait for the school board’s approval. Congratulations Michele!

Above photograph by Chris  Stanford, special to The Province.

It was the worst of places and the best of places for endangered turtles to nest: the long-jump pit at a crowded suburban middle school.

Young athletes discovered baby western painted turtles and eggs at KLO Middle School three weeks ago, after the sand in the pit had been pounded and churned by the jumpers.

Three tiny turtles emerged from the sand, and students dug out three dead ones and 10 smashed eggs. Two more freshly hatched turtles turned up soon after.

But though the nesting site proved fatal for much of the turtle brood, the discovery -following a similar find last year -has galvanized a group of students who have embarked on an innovative project to create a schoolyard wetland.

More information on registration for courses and workshops coming soon!