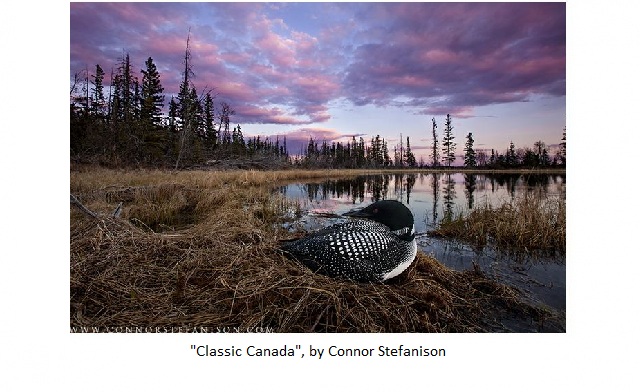 It might have been the rush of lilac clouds, the pristine reflectivity of the lake, or the solitudinous loon, but it was certainly a unanimous decision when selecting this week’s photo by Connor Stefanison. Shot within the BC Interior, Connor has captured some true Canadian elements in his appropriately titled, “Classic Canada”. The loon, a popular Canadian emblem, nests in a tranquil wetland with plenty of land to raise her hatchlings. Paired with the stunning cloud display, Connor has beautifully exhibited Canadian wildlife.

Common Loons (Gavia immer) are a popular representative of Canadian wildlife and their calls recollect warm Summer-time memories by the lake. Loons eat up to two pounds of fish each day and can live up to 30 years. The first loon relatives appeared 25 million years ago and were in 6 feet in length (that’s double what loons are today)!

It’s hard to imagine pocket change without loonies, however the iconic Canadian coin may not have existed if it were not for the original dies getting stolen. During the conversion from $1 bills to coins, the Royal Canadian Mint planned on using a “voyageur” design which featured a canoe in the same outdoor setting as seen on the current loonie. A set of voyageur dies were stolen during shipping and in order to eliminate the risks of counterfeiting, the RCM chose an alternate design which featured the loon (it was actually the runner-up design). It can be argued that the name “loonie” was to demonstrate a reluctance to surrendering dollar bills.

With Canada Day in the next few weeks, I found a few interesting Canada facts that I’ll surely be reminding my friends about all weekend long:

– About 14% of land in Canada are wetlands, which is 25% of the world’s wetlands – that’s the largest in the world!

– Estevan, Saskatchewan is the sunniest place in Canada, receiving 2,540 hours of sunlight each year.

– 50% of all the polar bears in the world live in Nunavut.

– If you’re on the east coast of Newfoundland, you’re actually closer to Ireland than you are to Saskatchewan.