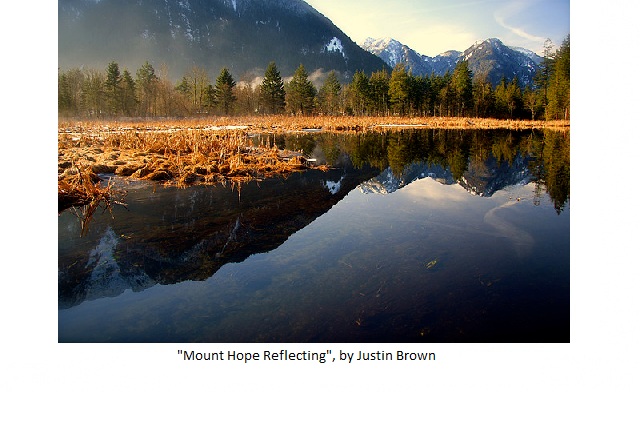 Well it’s that time of year again; time of celebration, festivities, and reflection. This week, we chose to cap off a great 2012 and a seemingly-quick-December with ‘Mount Hope Reflecting’ by Justin Brown. Taken on a brisk January day in Hope, Justin has captured a crisp image of Mount Hope reflecting majestically in a wetland near Suka Creek. The detailing from the mountains to the marsh caught our eye, even the reflection of the clouds to the right of the image seem to resemble a meandering stream. It was clear that this was a great choice for the finale of our 2012 Photo of the Month.

In early January 1965, Hope, B.C. experienced the largest landslide in Canadian history and moved an estimated volume of 47 million cubic meters of debris. Although the causes seem to be well-understood, the trigger for the landslide is less clear. Several factors led to the instability of the slope including unfortunate tectonic structures (such as faults) and weak materials due to weather erosion. Yet there are many theories about the main trigger which initiated the movement. One possibility is the fact that two small earthquakes occurred during the time of the landslide (in the early morning), however some scientists believe that these earthquakes were too small to trigger such a large landslide. Another theory is the phase changes in the ground and soil water as the temperature fluctuates around zero degrees Celsius, however the Hope Slide occurred during a period of constant sub-zero temperatures. If you can’t tell, I find geomorphology very interesting.

Thank you to Justin for this wonderful photograph! We’ve checked out some of his albums on Flickr and he’s certainly quite a skilled photographer. If you would like to visit Justin’s Flickr page, click here. Like Mount Hope, I’ve been doing some reflecting these past few days about my past year. Since the New Year is close by, I figured I might as well think up a resolution. Since I spent a majority of my 2012 at work or at school, I’ve decided that I need to explore the outdoors more and to visit more of my local wetlands because they truly are a breath of tranquillity in the midst of a busy day. If you have an interesting resolution we would love to hear it! Send us a message on Facebook or Twitter (@BCWFWetlands) and don’t forget to add your winter wetlands photos to our Flick group, Wetlands of British Columbia, for the chance to be our first 2013 Photo of the Month! Have a great New Year and hope everyone is having a warm and safe holiday!

More information on registration for courses and workshops coming soon!